Kuala Lumpur as a city has charms of its own to offer to the expats – a melting pot of culture, historical buildings accompanied by ultramodern skyscrapers, to name a couple. But just like any other city, Kuala Lumpur also has its own ups and downs over the years, making the stay just as memorable and bittersweet for a lot of expats that chose the city as their home. The following are the kinds of feels that are almost always experienced by a lot of the expats staying here.

Variety and freedom, but closed shops during festive seasons

As mentioned earlier, Kuala Lumpur is a melting pot of culture, home to many different kinds of peoples from different races that make up the composition of the city’s population. Generally, there are three major races – the Malays that practice Islam, the Chinese that practice Buddhism and the Indians that practice Hinduism, each with distinctive festivities and celebrations. Even more so, the Christianity major events are also observed here, such as Christmas and Good Friday. All these are protected by the government who oversees the freedom of religion in the city. However, this also means that roads will always be jammed during festive seasons, as public holidays are decreed for each of these events, sometimes up to two days. This could make it difficult to buy things and get stuff around.

It is a given that Malaysia has been the operating base for many oil and gas companies, as they locally source the oil here for exports and local use at times. As such, petrol tends to cost much lesser than expats would find in their home country. The same is true if they would require gas for their stovetops, as that isn’t too expensive too, which is very economical.

In addition to that, the country’s climate allows for growing various kinds of fruit and vegetable, as well as poultry. These would lead to the prices of fruits, vegetables and different kinds of meat to be a lot cheaper. The same applies to wooden furniture, clothing, textile, and ceramics.

Conversely, anything that’s not locally produced will be much, much expensive due to the duty stamps and imposed taxes. One major example would be on the prices of cars, which seen a massive difference between locally manufactured and foreign imported cars, the latter would almost cost at least 50 percent higher. Then there are also strict taxes on alcoholic items, therefore if you fancy some wine, beer or liquor, you will have to fork out slightly more money on that front too.

Kuala Lumpur and nearby cities in Malaysia are on the rise as a destination for medical tourism, and that’s for a good reason – the doctors are highly educated and well-trained, with costs that are much lower compared to having certain treatments done in the Western countries. All of such benefits can be enjoyed by expats living here too. One can opt between the government or private health institutions that are abundant here. Health insurance is also decently priced. On the other hand, the values here are rather conventional, with the common perception of the healing methods to involve certain traditions and beliefs.

Due to the various cultures living here, it is normal to see the city to overflood with various types of food. Malaysians, especially the Kuala Lumpur residents, are proud of their nasi lemak and roti canai for breakfast, while one can look forward to enjoy some Hainanese chicken rice for lunch and nan tandoori for dinner. Food is universally loved here, it is the uniting part that transcends race and religion in the city. However, despite having a lot of Western joints, there seem to be only a few that get it right, as the tastes are often made to suit the locals.

Now over to you. Ready to make that big move to Malaysia? Selamat datang.

Move to Malaysia without excessive cost and 100% safe with SPEEDHOME. SPEEDHOME is a Malaysia based property platform that offers Zero Deposit to its tenants. It allows you to deal directly with the owner, and skip all the agent fees and plausible scams.

Click this button above to choose your Malaysian Zero Deposit dream home! 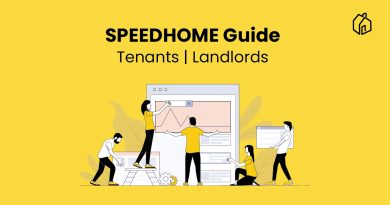 Vulcanpost: The Unheard Tale Of The Controversial Property Rental App And How It All Came To Be